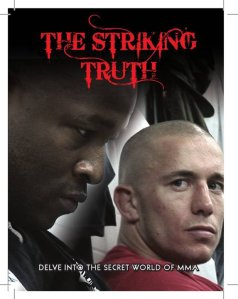 This past weekend I was lucky enough to be on set for of The Striking Truth working with an amazing team of people who are so talented and creative and do some pretty sic work. Seriously, an experience of a lifetime and while I was in awe of the athleticism of the athletes hard work and dedication before, seeing some of it live in action and really learning some things about the amazing GSP and Loiseau, I have even more respect for them now. They were so down to earth and funny…2 incredible athletes which most of the world knows, but this movie will will give you a look at why they are also awesome people with good character too. I wish I had the opportunity to sit and pick certain peoples brains more because I really want to learn more about the sport as I try to delve myself into it more. While it was funny to see how some people get all star-struck with “celebrities” and well oblivious to a movie being shot, it made me realize even more how much I feel for these people and can’t even imagine the shit they have to put up with by people pawing at them and being so fake and always wanting a piece of them and worst of all expecting them to do whatever and whenever or wherever like they owe it. Ahhh what an industry the entertainment world is and all the games being played…ok almost off on a tangent there. I not only had a blast, but I learned a lot and THAT is what I ask for in life…
I can’t wait to see the final project that has been in the making for some time and what the creative team behind it all finishes with. This documentary is sure to be a huge success.
Share this post