Music is SO good for your health

I apologize that this isn’t an “MMT original write up” but here is a great tid bit from CBC News Health on how music is medicine. It is not really “my blog style” of a write up (too serious and official-like lol) but read, enjoy, than crank up your tunes and rock on with your bad self for better health 😀

Music boosts the body’s immune system and is more effective than prescription drugs in reducing anxiety before a surgery, a research review from two psychologists at Montreal’s McGill University suggests.

“I think the promise of music as medicine is that it’s natural and it’s cheap and it doesn’t have the unwanted side effects that many pharmaceutical products do,” said Daniel Levitin, who co-authored the review recently published in the journal Trends in Cognitive Science.

They found that music had documented effects on brain chemistry and associated mental and physical health benefits in four areas:

The review found 15 studies showing that people’s levels of a stress hormone called cortisol dropped after they listened to relaxing music, indicating a reduction in stress. One paper even compared patients at a hospital before surgery who were randomly assigned to either listen to music or take an anti-anxiety drug such as Valium.

“People who received the music had lower anxiety levels than people who had the drugs and without side effects,” Levitin said.

Another group of studies found that older adults can boost their immune function, reversing age-related declines, by making music as participants in drumming circles, Levitin said. ‘I think the promise of music as medicine is that it’s natural and it’s cheap and it doesn’t have the unwanted side effects that many pharmaceutical products do,’ said McGill University researcher Daniel Levitin. (CBC)

The positive effects of music seem to be linked to the fact that music causes neurons in the brain stem, a primitive part of the brain, to be activated in sync with the beat, Levitin added. That has a cascade of chemical effects on the nervous system, typically evoking relaxation if the beat is slow and improving focus and alertness if the beat is faster.

So far, much of the evidence that the health impacts of music are caused by neurochemical changes is indirect, but taken together it does provide “preliminary support” for that claim, the authors wrote.

Nevertheless, Levitin said the idea that music has positive health effects is no longer controversial.

“I think this has gradually become accepted in the medical community,” he said.

Dentist Janet Tamo is among those who have already been putting the medical use of music into practice for some time. 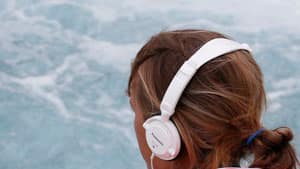 Fifteen studies showing that people’s levels of a stress hormone called cortisol dropped after they listened to relaxing music, indicating a reduction in stress. (Suzanne Plunkett/Reuters)

“We have been using music in the office for years to calm people down,” she said. “It actually calms people better than a sedative. It distracts them from what we are doing.”

Her patient Harris Casper confirms that.

“I think it gives me something to put my mind to aside from having people screw around in my mouth,” Casper said during a recent visit. “It is definitely relaxing.”

He added that being immersed in the music of U.S. R&B artist Usher has another positive side effect — it drowns out the sound of the drill.

Studies showed that slower music tends to be more relaxing than faster music, but familiar music is more relaxing, regardless of the type and tempo.

That brings up an important point about the use of music in a medical setting, Levitin said.

“Rather than the doctor saying, ‘Oh, you’ve got depression — take two Joni Mitchells and call me in the morning,’ I think what we need to have is recognition that people need to have control over what they are listening to.”